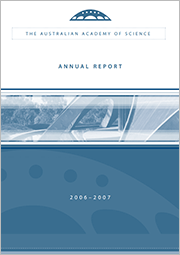 The Academy of Science has, for more than fifty years, promoted science and technology as the principal drivers of socioeconomic and environmental well-being. The Academy continued to fulfil its mission through provision of independent scientific advice and promotion of a scientific culture.

I thank the Academy’s 20 National Committees for providing, often at short notice, high level advice on issues of national import. These authoritative reports are referenced in the pages that follow and range from the promise of stem cell research to the role of nuclear power in Australia’s future energy mix. In December 2006 the Prime Minister, writing to the Chief Scientist about the five-yearly review of the learned Academies, said ‘the Academies have served and continue to serve an important purpose in providing informed and balanced policy debate and development on many national issues’.