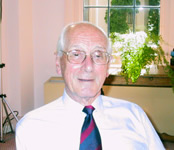 Dr Fraser Bergersen was interviewed in 2004 for the interviews with Australian scientists series. By viewing the interviews in this series, or reading the transcripts and extracts, your students can begin to appreciate Australia's contribution to the growth of scientific knowledge.

The following summary of Bergersen's career sets the context for the extract chosen for these teachers notes. The extract describes what nitrogen-fixing notdules are and why they are important to plant science. Use the focus questions that accompany the extract to promote discussion among your students.

Bergersen moved to Canberra in 1954 to take up an appointment at the CSIRO Division of Plant Industry, where he remained for the rest of his scientific career. His research added to our understanding of the basic science that happens in nitrogen-fixing nodules found on the roots of a variety of plants. Bergersen’s work combined basic science with practical applications in agriculture. He retired in 1994.

Can you provide us with a bit of background on what nitrogen-fixing nodules are, why they are important and why you chose to study them?

After some initial work I moved on to soybean as a model system, growing the soybean plants in a glasshouse. The nodules on soybean roots are typically round bumps about 2 or 3 millimetres in diameter, filled with special tissue in which there are symbiotic bacteria - the agents of nitrogen fixation. The nitrogen which is fixed is moved out of the bacteria into the plant and translocated from the roots to the shoots, where it joins up with the photosynthetic system of the plant.

Nodules are very complex organs. If you cut through a root nodule on a soybean plant, you can see that the central part is pale pink and surrounded with a white or greenish white cortex. It is these pinkish cells in the centre which are the site of activity.

Yes, and also for pasture, which I worked on first. At that time, pasture systems in much of Australia relied on subterranean clover - or, elsewhere in the country, other clovers and just a few other legumes - for the production of good balanced food for cattle and sheep, and to produce a vigorous growth of the plants. (Later, soybeans, lupins and other crops which were nodulated became important too.) In addition, the nitrogen which was fixed in the nodules became available, through the processes in the soil, for the grasses and other plants which grew in association with the legumes. This system was very important to Australia. Indeed, the world depends on nitrogen fixation by this system almost as much as on photosynthesis for its cycles of nutrition.

So it was known already that nodules, and the bacteria living within them, were important. But not much was known about how these bacteria functioned, what products they formed or how you could maximise their growth or interaction in a pasture system, and the Division of Plant Industry decided that it needed to get a greater understanding of the science behind it all. Is that right?

That's pretty right. Despite the lack of basic knowledge, there was quite an existing program in Australia on the nitrogen-fixing bacteria of pasture legumes. For instance, Professor Jim Vincent, in Sydney University, and Professor Lex Parker, in Western Australia, had active programs in selecting better bacteria for subterranean clover and other legumes. They knew that you could select better bacteria, but they didn't know what the functions of these bacteria exactly were. It was at about that time that all this knowledge began to come together, and I was a part of the scheme - but not the only one, by any means!

The Rhizobium Research Group gets under way

You were brought in, then, as a member - and, later, leader - of the group which Dr Frankel set up, the Rhizobium Research Group. What is rhizobium?

'Rhizobium' is a general term for the bacteria in the root nodule system. They live in the soil, from where they infect the roots of the leguminous plants and build the nodules in which they function. We now know that Rhizobium is only one of about six genera of soil bacteria involved, but loosely they are all called rhizobia.

An edited transcript of the full interview can be found at http://www.science.org.au/node/325903.