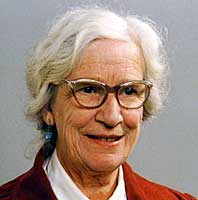 Dr June Olley was interviewed in 2001 for the Interviews with Australian scientists series. By viewing the interviews in this series, or reading the transcripts and extracts, your students can begin to appreciate Australia's contribution to the growth of scientific knowledge.

The following summary of Olley's career sets the context for the extract chosen for these teachers notes. The extract covers how she came to work in Australia and some of the projects in which she was involved. Use the focus questions that accompany the extract to promote discussion among your students.

June Olley was born in 1924 in Croydon, England. She received a BSc (Hons) from University College London in 1944. After this degree she investigated lipid metabolism in the livers of protein-deficient rats at the Human Nutrition Unit of the Medical Research Council. She received her PhD from the London School of Hygiene and Tropical Medicine in 1950.

From 1951-1968 Olley worked at Torry Research Station, Aberdeen, on a number of aspects of fish technology. During this time she worked and studied at a number of institutions around the world, including the University of Washington, USA (1956-1957); Hadassah Medical School, Israel (1961); and FAO Fisheries Division, Rome, Italy (1962-1963). She was local chairman of the North East of Scotland Branch of the Society of Chemical Industry (1964-1966) and served as scientific secretary of the International Association of Fishmeal Manufacturers (1966-1968).

In 1968 Olley received a DSc from the University of London, and in the same year moved to Tasmania.

Olley joined CSIRO in 1968, working at the Tasmanian Food Research Unit, and remained with this organisation throughout her working life. From 1970 until her retirement in 1989 she was leader of the unit, where she contributed to numerous publications in various areas of fish and shellfish technology. During this time she served the Tasmanian Royal Society as junior vice-chairman (1972-1973) and vice-chairman (1973-1974).

After retirement from CSIRO, Olley became an honorary research associate in the Department of Agricultural Science and Department of Civil and Mechanical Engineering at the University of Tasmania. She continues to pursue her research into aspects of fish technology and microbiology, and has contributed to a number of scientific papers and a microbiology textbook. She received an honorary DSc from the University of Tasmania in 1989.

Olley became a Member in the Order of Australia in 1988.

A pH meter and all: transitions during an eventful year

In a way, the arrival of two senior Australian fisheries scientists in Aberdeen in 1967 led to the end of your 18 years of working at Torry, didn’t it?

Yes. They had come to see the fishmeal industry of the north-east of Scotland. My colleague who was supposed to meet them forgot to go to the airport, and so I was sent instead. I took them in my red Triumph Herald convertible to see the fish factories all round the north-east of Scotland, and at the end of the day they said that I was the person they wanted, not the one who had forgotten to pick them up. Would I like to come to Hobart and say whether Tasmania should have a fishmeal industry?

As my future husband, Frank, whom I had met in Aberdeen two years before, was a barrister in Hobart and had been writing to me for about 18 months, I said yes, I’d come – even though I had to pay my own fare. And he proposed the third night after I arrived.

I told the scientists they shouldn’t have a fishmeal factory in Tasmania because they couldn’t rely on fish being available. The fish move inshore and offshore, and it’s a big capital investment to put up a building if they’re not going to stay put. Ultimately Tasmania got the federal government to pay for the factory. Some people were sent bankrupt, some people made money – it had a very chequered history. Now it makes fishmeal for fish farms.

Once you became engaged, how did you move yourself out here?

Well, while I was in Tasmania I was asked to go and look at the abalone factory at Margate. Its canned abalone were extremely tough, just like shoe leather. I told the factory I thought its pH was wrong. These things were far too acid, and that was because they weren’t being processed properly.

You can use a pH meter to measure acidity (such as to show whether the soil in your garden is acid or alkaline) but they’d never heard of such a meter so I thought I’d better borrow one. I went to the CSIRO Regional Laboratory, on Battery Point, rang the bell and said I was June Olley and I’d like to borrow a pH meter. At that, the director had me in and talked to me for about an hour, after which he said, ‘I think we need you here.’ He rang up the CSIRO headquarters in Sydney and got me an interview, and I went back to lunch and surprised my fiancé by saying, ‘Well, I’ve got a pH meter and a job.’ Next, of course, I had to go home and give my resignation. Then I came on out here.

And in the same year, 1968, you were awarded a Doctorate of Science by the University of London, and you got married. Quite an eventful year.

A fortunate appointment to CSIRO

So you joined CSIRO.

Yes. The job was with the Tasmanian regional laboratory. It ‘specialised’ in anything that Tasmania needed to be done, so there were lots of little units, such as the rainmakers. I joined the Food Technology Group to work in the fish part of the unit. My one colleague there was away in Japan at the time and I hadn’t yet met him.

Your appointment as a biochemist was initially in a position of experimental officer. Why was that?

Fortunately, the typist at Torry, in Aberdeen, had lost half of my CV when she posted it out. Otherwise I wouldn’t have had a job, because as a DSc I’d have had to be the director of the place! So it was very good that I got in by mistake. And within a year I was reclassified as a research scientist, anyway.

My first job at CSIRO was to try and get the abalone softer in the cans, but then we went on to all the alternative ways that abalone could be used, apart from just canning them. We dried them – in fact, an awful lot of abalone fishermen were already drying abalone in their garages – trying to get the best way to make them look. You can make them look almost transparent, with the blood vessels visible inside them, or you can make them almost pitch black by heating them too hard. And we tried shipping them live in boxes, just in air, to Japan. We also tried making silage by mixing the viscera, the waste, from the canning factory with sulphuric acid from the zinc works, to make a silage which could be then neutralised and fed to pigs and poultry.

Within a year, I think, you’d been put in charge of a group of people specialising in fish and shellfish.

Well, it started off as just the two of us. To expand into products other than abalone, therefore, we had to apply for grants from the Fishing Industry Research Trust Account and so I was put on the committee. It was a bit difficult to be applying for grants while also choosing the people who got them: you had to be very fair.

We got grants for working on comminuted fish. For that you put the fish through a sort of meat and bone separator. The bones all go down a chute and the fish comes out as a mince. The idea was that fish that wasn’t particularly marketable could be made into fish fingers. That project never took off.

We looked at substitution of fish, in which restaurants and shops were trying to sell cheap species as more expensive ones, and we caught a Sydney restaurant. Each species of fish has its own fingerprint, a bit like the DNA genetic ones that we’re all getting used to today. If you take a water extract of a fish, run it down a strip of paper and then stain it, you get a whole lot of bands, from which it was obvious that the restaurant was selling ling as barramundi – not deliberately, of course. They were terribly upset. But they still got ling when they tried again. They were being swindled by an importer from Singapore. We did a lot of other species of fish, too.

One project we were asked to do, rather than applying for it, was whether rock lobsters should be drowned in their ice water after you caught them, or properly guillotined. The West Australians thought that the South Australians were ruining the trade by drowning them, but we were able to prove it didn’t make any difference. So everybody was happy.

We also looked at vacuum packaging, or modified atmosphere packaging, of fish – so that you could sell it after a longer period than if you had just kept it on ice – and at how long any individual species would keep on ice. For this shelf-life work we had to develop sensory panels to smell the fish, assess their texture and odour, and so on.

Order a DVD of Interviews with Australian scientists