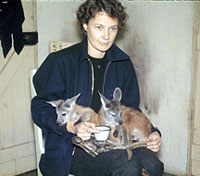 Dr Patricia Woolley was interviewed in 2000 for the Australian Academy of Science's '100 Years of Australian Science' project funded by the National Council for the Centenary of Federation. This project is part of the Interviews with Australian scientists program. By viewing the interviews in this series, or reading the transcripts and extracts, your students can begin to appreciate Australia's contribution to the growth of scientific knowledge.

The following summary of Woolley’s career sets the context for the extract chosen for these teachers notes. The extract covers how she began her work on the Julia Creek dunnart. Use the focus questions that accompany the extract to promote discussion among your students.

Patricia Woolley was born in 1932 in Denmark, Western Australia. After she earned a BSc from the University of Western Australia (1955) she continued working there as a research assistant to Professor Harry Waring, investigating marsupial biology. Her lifelong interest in dasyurid marsupials began at this time.

In 1960 Woolley moved to Canberra and she worked demonstrating and lecturing in zoology at the Australian National University before completing a PhD there in 1966.

Woolley worked at La Trobe University in Melbourne from 1967 to 2000 as lecturer, senior lecturer, reader and associate professor. During this time she researched dasyurid life history and reproduction. In 1991 she started searching for the Julia Creek dunnart, Sminthopsis douglasi, a species thought to be extinct, and caught the first live animals in 1992.

During the 1980s and 1990s Woolley made many trips to New Guinea, searching for dasyurids and documenting their biology.

Woolley is currently an emeritus scholar at La Trobe University. She is a research associate of the Queensland Parks and Wildlife Service and also serves as a scientific advisor to Pearcedale Conservation Park, Victoria.

Eventually you turned back to Australia – presumably when the research grant was running out – to work on another problem to do with dasyurid marsupials.

That’s right. I felt I had done as much as I could in New Guinea without more substantial funding. I thought I would follow up my earlier line of research, looking at whether I could use penis anatomy to establish relationships within the genus  Sminthopsis. For this project I had to obtain males of all 19  Sminthopsis  species, many of which were very poorly known. That involved me in field work, again in many remote parts of Australia, trying to obtain material for the study. One of the species I wanted to work on was  Sminthopsis douglasi, otherwise known as the Julia Creek dunnart. That was rather a challenge, as the animal was extremely rare (it was known only from four specimens in museums) and might even be extinct. Although I got permission to try to collect them, I’m quite sure that no-one thought I’d find them.

I started off by getting help from the local people. I did a little advertising and said, ‘Have you seen any of these animals? Or if your cat brings anything in, would you save it for me and let me have a look at it?’ I was lucky: after a few months two or three specimens turned up, and so I was able to focus on the areas that these had come from and go trapping. In fact, on my second attempt to trap them I was able to get eight animals that I brought back to La Trobe to develop a breeding colony.

At the same time you investigated the distribution of the Julia Creek dunnart in the wild, didn’t you?

Yes. Because it was so rare, I was interested to see how far afield it could be caught. I did try trapping, but it requires enormous effort and trapping success is generally very low. So I utilised the superior ability of owls to find small mammals – they have to eat these animals to live. They regurgitate the bones and fur, which they can’t digest, in the form of pellets. I went around collecting owl pellets from as many localities as I could, over an area where it seemed likely that I might find the remains of Julia Creek dunnarts, and so I was able to plot the distribution of the animal. We’re still trying to expand the area it is found in – I currently have some funding to try to establish, perhaps by radio tracking, exactly where the animals live. But the distribution is very restricted and over ten years we have trapped only about 300 individuals. The Julia Creek dunnart was placed on the endangered species list some years ago. We are also trying to determine what impact introduced predators are having on the animals. From a project carried out by one of my students we know that they are preyed upon quite heavily by cats and foxes.

An edited transcript of the full interview can be found at http://www.science.org.au/node/327219.