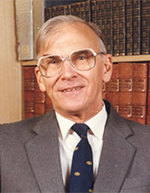 You can order the DVD from the Academy for $15 (including GST and postage)
This interview is also available in full on the Australian Academy of Science's youtube channel.
View Professor Bob Crompton's photo gallery.

Robert Woodhouse Crompton was interviewed in 2011 for the Interviews with Australian Scientists series. By viewing the interviews in this series, or reading the transcripts and extracts, your students can begin to appreciate Australia's contribution to the growth of scientific knowledge and view science as a human endeavour. These interviews specifically tie into the Australian Curriculum sub-strand ‘Nature and development of science’.

The following summary of Professor Crompton’s career sets the context for the extract chosen for these teachers’ notes. The extract discusses his hobby of building electric motors and his research in electron swarm physics. Use the focus questions that accompany the extract to promote discussion among your students.

Robert Woodhouse Crompton was born in Adelaide on 9 June, 1926.  He spent a happy childhood playing with Meccano sets and making electric motors to power his toys, and for items such as gramophones and clocks. He attended primary and secondary school at Prince Alfred College in Adelaide and topped the state in physics upon his graduation. Crompton was awarded a cadetship in the physics department at The University of Adelaide and studied for a science degree in between making equipment for the physics laboratory, which included making an automated Wilson cloud chamber and an electron diffraction camera from an old TV. He enrolled in honours in 1949 and despite some learning setbacks with scientific German, he successfully commenced his research into how electrons interacted with atoms and molecules.

Crompton then enrolled as one of The University of Adelaide’s first PhD candidates in physics. He chose to study the collisions between electrons and gas molecules, an endeavour which involved glassblowing his own equipment and making his own research apparatus. He graduated in 1954. In 1953, Crompton took a short period of study leave in post-war Swansea in Wales accompanied by his young wife and child. The University College of Swansea had not yet recovered from its bombing during World War II, so Crompton and the other scientists conducted their research in wooden huts.

Between 1950 and 1960, Crompton was a physics lecturer at The University of Adelaide. He formed a small research group, which was later invited to join the newly formed Research School of Physical Sciences at the Australian National University in Canberra. Crompton’s group took up this invitation in 1961 and spent a year building laboratory equipment whilst waiting for its new building to be constructed after it was gutted in a fire. Gradually they built a world renowned research group in electron swarm physics that was known for its investigations of how electrons behave when they collide and rebound from gas molecules. Some of the group's measurements with helium and hydrogen atoms still serve as reference points today.

An introduction into science - making motors and electric clocks

I assume that playing with electric motors and Meccano sets also led you into science?

It was sort of my introduction, yes. My brother and I used to make things in those days and some of the things that we ‒ or I ‒ made were electric motors. They were pretty primitive, but they did go, and we used them to drive our Meccano models. We cut the form of the rotating armature ‒ subsequently wound it with copper wire, of course ‒ out of cigarette tins that were available in those days. I suppose there might have been perhaps 30 leaves or pieces all cut to the same shape, put together and then wound with copper wire to make the armature. The commutator was a piece of copper tubing, which we split longitudinally into whatever number of poles the motors had – either three or four – and the current was conducted to the copper commutator via carbon brushes, which were pushed against the commutator by little springs. It was quite sophisticated. They went like the wind, those motors. They probably wound up to 2000 or 3000 rpm if you let them go.

I believe that you also went on to make a synchronous gramophone motor?

Yes. If you do your sums, you will find that if you have a large armature with 77 teeth and a stator that also has 77 teeth, as one tooth comes up against the corresponding tooth in the stator, it fortuitously spins at 78 rpm with an error of only 0.1 per cent. So the rotor and the stator had 77 teeth and the stator was wound to be energised. But, when we put the thing together, we found to our horror that it hunted. “Hunting” is a phenomenon whereby the rotor tends to go too fast for a bit, then drop behind and then go too fast again. That is not good when you are trying to listen to a gramophone record. We cured the problem by mounting the stator on ballbearings and damping it. Instead of the rotor-hunting, it continued going around at a constant speed, and the stator just jiggled around ever so slightly on its damped mounting. That was quite a successful venture.

A little bit later, I made an electric clock. The gramophone motor has gone to its father’s long ago ‒ it no longer exists, which is a bit sad ‒ but the little electric clock goes to this day. It also is synchronous. It starts off with a reduction from a worm drive to get down to some reasonable speed. I have forgotten what speed it spun at. It was relatively slow but too fast for a clock. The clock started off with a worm drive to reduce the rotation speed of the first wheel quite considerably then a gear-train down to the minute hand and the hour hand. It still sits in our living room and still keeps perfect time. It is still there.

So that was an AC motor?

Yes, it was run off the AC mains, as was the gramophone motor.

I think it is appropriate here for you to tell us a little about the research you did.

When we do these kinds of measurements there is an electron gun. It is the same thing that is in a TV tube that produces an electron beam and hence the spot that goes backwards and forwards and draws the pictures on the screen. In the experiments, the electron beam is directed at some gas molecules emerging from a nozzle. The electrons hit, or may hit, one of the atoms or molecules in that molecular beam and they bounce off. We collect them on the circumference of a circle and find out how many go in this direction (indicates), that direction (indicates) and that direction (indicates). From that, we work out what is called the cross-section for the electron hitting your target molecule.

Swarm experiments are entirely different. In swarm experiments, we don’t have single electrons to study. Instead there is a whole ensemble of them in what we call an “electron swarm”. We generate the electron swarm in a gas by having, for example, a hot filament or a radioactive source to produce the electrons. Then we have apparatuses in which we draw the electrons through a very small hole. They enter what we call the “diffusion chamber” and the whole apparatus is filled with gas at anything from a very small fraction of an atmosphere to more than an atmosphere. So the electrons issuing through this small hole can no longer stay as a beam because, as soon as they emerge from the hole, they hit another molecule. I don’t know if anyone knows the term “Galton board”, but it is rather like a Galton board where a marble rolls down a peg board with an array of pins, hits a pin, goes here, hits another pin and goes there, so a group gradually spreads out. That is exactly what the electrons do. They hit molecules of the gas, bounce off them and go on and hit other molecules. Instead of ending up with a beam one millimetre in diameter, which is what we started with, we end up with a diffuse swarm of electrons.

One of the very simple measurements that we make is to measure the profile of that electron swarm. That is one measurement. The other is to chop the electron swarm into segments. Then we have slabs of charge moving down the apparatus and it is possible to measure how rapidly the slabs of charge move from one end of the apparatus to the other. I won’t go into the technicalities of how we do these things, but they are basically the two measurements that are made in swarm experiments. There are others, but they are the two basic ones.

Swarm experiments are easier, but it is a very complicated business to get the cross-sections from what is really a very indirect process. It involves observing how this group of electrons drift and diffuse in the high pressure gas. It is done by solving what is called the Boltzmann equation, which relates the motion of the particles as a group to the motion of the individual electrons in the group, and, these days, through the use of computers. In this way, one can extract the so-called cross-sections, which is what we are trying to obtain.

An edited transcript of the full interview can be found at http://science.dev.aspedia.net/interview-bob-crompton

Select activities that are most appropriate for your lesson plan or add your own. These activities align with the Australian Curriculum strands ‘Science Understanding’, ‘Science as a Human Endeavour’ and ‘Science Inquiry Skills’. You can also encourage students to identify key issues in the preceding extract and devise their own questions or topics for discussion.

Synchrotrons – making the light fantastic (Nova: science in the news). Describes synchrotron radiation and how it is giving researchers unparalleled power and precision in probing the fundamental nature of matter: http://www.science.org.au/nova/068/068key.htm

Nanoscience is leading to revolutionary breakthroughs in fields as diverse as manufacturing and healthcare. This topic outlines what is involved in working at the nanoscale: http://www.science.org.au/nova/077/077key.html

Thinking ahead – fusion energy for the 21st century? (Nova: science in the news).

Discusses whether fusion has a role to play in our energy-hungry future: http://www.science.org.au/nova/101/101key.html

Provides clear and simple information about static electricity, the difference between current and voltage, and electrical flow:
http://primaryconnections.org.au/science-background-resource/data/Phy/sub/electeng/print.htm

Experiments from CSIRO that explore ‘what is electricity’?

Build your own motor (Museum of Science and Industry, Chicago).

Includes simple instructions for how to build a cheap electric motor, and describes what is happening from a scientific perspective: http://www.msichicago.org/online-science/activities/activity-detail/activities/build-an-electric-motor/browseactivities/0/

Electric motors and generators (University of NSW, School of Physics).

Describes the difference between different types of electric motors, how to build simple motors and the physics behind them. The explanations may only be suitable for high school students. Also includes animations: http://www.animations.physics.unsw.edu.au/jw/electricmotors.html

All about scanning electron microscopes and how they work: http://science.howstuffworks.com/scanning-electron-microscope2.htm