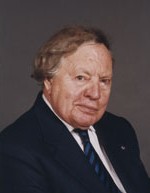 Professor Noel Hush was interviewed in 2011 for the Interviews with Australian scientists series. By viewing the interviews in this series, or reading the transcripts and extracts, your students can begin to appreciate Australia's contribution to the growth of scientific knowledge and view science as a human endeavour. These interviews specifically tie into the Australian Curriculum sub-strand ‘Nature and development of science’.

The following summary of Professor Hush’s career sets the context for the extract chosen for these teachers’ notes. The extract discusses Hush’s work on the molecular electronics of photosynthesis and how increases in computer power have led to the understanding of ever more complex systems. Use the focus questions that accompany the extract to promote discussion among your students.

Noel Sydney Hush was born in Sydney in 1924. He finished secondary school in 1941 and began university the following year. Hush completed a BSc Hons (1945) and MSc (1948) from the University of Sydney. For the latter part of this time he worked as a research fellow in the Department of Chemistry (1945-49). Hush then accepted an assistant lectureship at the University of Manchester (1950-54). Whilst in Manchester, Hush undertook theoretical research into the energetics of reactions of metal ions. In particular, those involving radicals and ions from hydrogen peroxide reduction, theory of electrode processes and molecular quantum chemical studies. On the basis of his published work, he was awarded the University’s Doctor of Science (D.Sc.) degree in 1959. In 1955, Hush moved to the University of Bristol where he worked firstly as a lecturer and then reader (1955-71) in the Department of Chemistry. It is at Bristol University that Hush began his work on electron transfer processes. His work at Bristol also included investigation into the nature of mixed-valence systems and electronic states of multiply- ionised systems and fundamental work in molecular quantum mechanics.

Professor Hush has received multiple honours throughout his career including, fellowship to the Royal Australian Chemical Institute (1973), fellowship to the Royal Society of London (1988), the Centenary medal from the Royal Society of Chemistry (1990), officer of the Order of Australia (1993), the Matthew Flinders medal and lecture (1994), foreign membership to the American Academy of Arts and Sciences (1999), the inaugural David Craig medal (2000), the Australian Centenary award (2003), the Physical Chemistry medal of the Royal Australian Chemical Institute (2006), the US Robert A Welch award (2007), doctor of science (honoris causa) degree from the University of Sydney (2009) and election as a foreign associate of the National Academy of Sciences (2011).

Molecular electronics and the ‘special pair’ of photosynthesis

You have been recognised by most of the academies, including the American academy, the Royal Society and others. And you got the Welch prize. Was that a surprise?

Looking at the impact of your field, it has had tremendous kinds of repercussions in all sorts of areas, electronics and otherwise. But, going back to photosynthesis, which is electronics these little plants are doing all on their own – how does that work quantum mechanically?

The simplest systems are the bacterial photosystems. They are a little bit simpler than the green leaf ones. I was saying before, when we were talking about how in order to get reactions going, that you have to put some energy into the systemand this is commonly thermal energy – heat. But you can also use light – visible or near ultraviolet from the sun. Nature discovered that you could make molecules which would absorb the energy from the sun and could store it. This energy from the sun is atomic energy, which people forget about. The absorbed energy could then feed into something in the middle, which could then knock an electron out. That electron would then whip down to the other end and would sit on a quinone, and would reduce it. That is the first step to synthesising carbohydrate. So we have the energy coming in from the sun and it strikes these acceptors of the energy. They are arranged in beautiful geometric patterns – lovely patterns only because that is the most economical of energy. Then they funnel that energy down to what is called the ‘special pair’. The electron is flipped out of the special pair by that energy. In about a picosecond the electron hits the quinone. Then out at the other end flows the carbohydrate: the leaves, the branches and, in our case, our tissues and our bodies. So you have an electron transfer reaction, which is a photochemical electron transfer. Our problem is to find out what it is and its details.

When I began in Manchester, it was possible to do very simple parameterised calculations on molecules – quantum mechanical calculations. At the time I left England, at the beginning of the seventies, it was just possible to do a ‘serious’ calculation (that is, one using only the fundamental physical constants) on a single water molecule. You could do approximate calculations. By the mid-seventies, you could do a serious calculation ona pair of water molecules – a water dimer. There are three water dimers. They differ only by small amounts of energy, which would have been impossible to calculate earlier. The water dimers are very important to living systems, particularly with hydrogen bonding. What was happening was that we were improving our methods of calculation all along the way. But the difficulty of the calculation can go up at to the fourth power of the number of functions – higher for more exact calculations.This makes great demands on computer power.Moore’s Law, which predicts the essentially exponential increase of computing power over time, was helping us along the way. But we also had to improve the efficiency of the calculations. That is where Thales came in. Kohn and Sham brought in the density functional method of calculating, not the wave function directly, but the electron density. That made it much easier. A combination of these advances means that we are now able to consider increasingly more complex systems.

In about the late eighties and nineties with JR Reimers, on the photosynthetic system, calculations here use a bit of a trick – ‘divide and conquer’. The important reaction centre is in the middle and it is surrounded by a great protein network, like a basket, which we treat rather more approximately. The bit in the middle we treat with much more precision. So we have many atoms, of which the middle reaction centre atoms are treated rather carefully. We have to account for the vibrations of this centre. We have four million vibrational states. Right in the middle we have these two molecules, over which, an odd electron is distributed. This electron is going to jump out when activated by the photon impulse to start the reduction reaction. These vibrational states give a very detailed understanding of the reaction mechanism.

I have mentioned that electronic transition (called an ‘intervalence’ excitation) that got Taube so excited. We predicted that there would also be that sort of transition in the photosynthetic centre, and it has been found. When I say ‘the photosynthetic system’, there are many natural and mutagenetic varieties – about 50, and the intervalence transition is different in each one. When you look at that transition, you can actually check back on your calculations and it all ties together. So quantum mechanics gives you a pretty good picture of what is going on, although there is still an enormous amount yet to be done. For example, the electron can choose between two almost identical pathways to travel down to reduce the quinone, but it always obeys European traffic rules and keeps to the left. Why, we don’t yet know.

An edited transcript of the full interview can be found at http://www.science.org.au/scientists/interviews/h/hush.html.

Select activities that are most appropriate for your lesson plan or add your own. These activities align with the Australian Curriculum strands ‘Science Understanding’, ‘Science as a Human Endeavour’ and ‘Science Inquiry Skills’, as well as the New South Wales syllabus Stage 6 Chemistry outcome 8.5.1 and 8.5.4 and Stage 6 Biology outcome 9.9.4. You can also encourage students to identify key issues in the preceding extract and devise their own questions or topics for discussion.