The education revolution that drive science and builds nations

He came to this country from the US partly because of its unique position and facilities. But Australia has matured since then, says our newest Nobel Laureate, astronomer Brian Schmidt. He is optimistic about the future for Australian science and the contribution it can make to improving lives, in this country and the world. Here is an edited version of the speech he gave at the presentation of the 2011 Prime Minister’s Awards for Science. 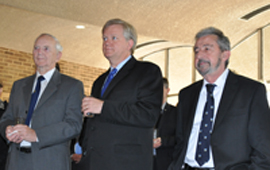 Despite my accent, I have lived in Canberra longer than anywhere else in my life. A lot has changed in the past 17 years. When I arrived in Australia in 1994, it was a well-off country separated by vast oceans from the rest of the world. Today, Australia is one of the world’s wealthiest countries, gateway to the fastest growing part of the world economically, Asia.

It has come of age. The world is rapidly changing, and Australia is in a unique position to shape its future for the century ahead.

Eleven years ago I stood up on this podium—as the recipient of the first Malcolm McIntosh Prize for Physical Scientist of the Year—in complete wonderment of the moment. I feel that same wonderment tonight, as we salute Australia’s finest scientists and science educators

When I came to this country, Australia didn’t have a science awards night dedicated to its own researchers. Now, we celebrate our nation’s best scientists and educators on our own terms.

The Malcolm McIntosh Prize was, in fact, the first award I received for my work on the accelerating Universe, setting off a progression which culminated in last week’s Nobel Prize announcement. It is a sign of our nation’s confidence—and important to me—that my home country was able to recognise my part in this discovery first. 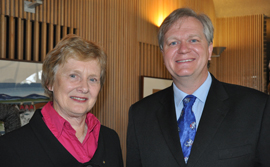 The policy makers of this generation have a unique opportunity to shape the long term prosperity of this country. Using the opportunities that arise from a prosperous, agile economy, Australia can ensure its future prosperity in a rapidly changing world through a strategic vision of and investment in education, science and technology.

The education part of this triumvirate is straightforward. Australia needs a workforce educated commensurate with its wealth—to put it simply, the world’s best educated workforce. This is the engine of future prosperity.

It should not be surprising that my high school education was sensational. I grew up in Alaska during the oil boom. Alaska paid teachers based on their ability, and paid them exceedingly well, relatively speaking. Among my teachers was a man with a PhD in chemistry from the Massachusetts Institute of Technology. He was also my cross-country running coach.

We should be smart and learn from tonight’s award recipients, but ultimately, as in Alaska, it will cost money, and it will take time. This, however, has to be at the top of our agenda. And, in relative terms, it really isn’t that expensive—12 years of good education provides a 50-year legacy. So, Prime Minister, I applaud the beginning of the education revolution—but let the revolution continue.

Science is the building block of future technological breakthroughs. Basic science research creates revolutionary new ideas. It’s a messy process, but it is the process that has taken our world from the Dark Ages to our current prosperity. Remember that the 2009 Prime Minister’s Prize for Science recipient John O’Sullivan started out by trying to discover evaporating black holes. He never found any of them, but ended up helping to invent the Wi-Fi system we all now use. And the royalties flowing back to Australia from his work are just the beginning. His achievement has increased productivity not just Australia, but around the world.

Tonight we honour Professors Ezio Rizzardo and David Solomon who have used their basic research in polymers to open a whole new way of making innovative products. Again significant royalties will flow from their inventions back to CSIRO. Professor Solomon was also largely responsible for Australia’s plastic banknotes. So science really does make money—directly!

Scientific research thrives in world-class institutions. Australia should strive to strengthen its universities, and also to ensure that CSIRO remains the unique research institution it is. I can see nothing but good emerging from working towards having at least one university in the top 10 internationally, and three in the top 50.

Then there is the process of taking the science and technology to market. This traditionally has been hard. Australian companies have found it difficult to capitalise in our small domestic market—in both senses of the word. But this is an area in which the world order is changing. If Australia works with partners on a more international basis, it will be better able to transform its good ideas into goods and services in the global marketplace. 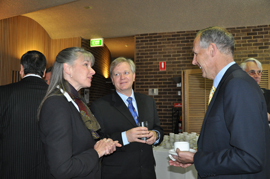 Working internationally is challenging for governments—a posture here, a step there. Progress is painfully slow. But for scientists, it comes naturally. We routinely work together in the pursuit of knowledge. So science can be a conduit to take Australian industry to the world.

For example, over the past 5 years, with the support of CSIRO and the Commonwealth Government, Australia has pulled out all stops in putting in a superb bid to host the Square Kilometre Array Telescope in Western Australia. This next-generation radio telescope will enable astronomers around the world to make fundamental discoveries of our Universe. But it will also facilitate opportunities for Australian companies to work with their European, Asian and North American counterparts—creating linkages everywhere.

But the Square Kilometre Array is only one of many such international projects. Not all, of course, will be based in Australia, and not all have equal merit. But involvement in a portfolio of such projects can provide a wealth of scientific and industrial opportunities within the international landscape.

The future for Australia is indeed bright—but it is not guaranteed. Capitalising on Australia’s opportunities will not just happen, it requires strategic science and education policies that adapt to a changing world. And Australians will have to be willing to make significant changes in how they go about their business.

But we have all the ingredients for success:

While I cannot predict if tonight’s award recipients are future Nobel Prize winners in-the-making, it matters not. Their work requires no further validation. We, as Australians, tonight celebrate the profound contributions of our science prize laureates to our society.

I congratulate this year’s science prize winners, and hope their award is as inspiring and enabling as the Malcolm McIntosh prize has been to me over the past 11 years.