Australia was represented by 13 young researchers at the 65th Lindau Nobel Laureate Meeting, held 28 June – 3 July 2015 in Lindau, Germany. This year’s meeting was dedicated to interdisciplinary scientific exchange and saw a record number of 65 Nobel Laureates congregate to meet 650 young scientists covering the fields of physiology and medicine, physics and chemistry.

The Lindau meeting provides young researchers the exciting opportunity to interact with their scientific heroes, exchange ideas, gain exposure to areas in their chosen disciplines and establish new contacts and networks with their peers. Academy Fellow Professor Jim Williams (ANU) led this year’s enthusiastic delegation and was accompanied by invited guests, the Academy’s President Professor Andrew Holmes and Fellow Professor Phil Kuchel. Attendance of the young Australian scientists was made possible by a grant from the Science and Industry Endowment Fund (SIEF).

On the final day of the meeting 36 Nobel Laureates, including Australian Laureates Brian Schmidt, Elizabeth Blackburn, Peter Doherty and Robin Warren, signed a landmark declaration on climate change. The Mainau Declaration calls on the nations of the world ‘to take decisive action to limit future global emissions’ as part of the Paris climate talks later this year.

Following the meeting the delegation undertook a series of site visits supported by the Australian Government Department of Industry and Science, visiting three Max Planck Institutes, the Paul Scherrer Institute in Switzerland and the impressive Mercedes Benz plant in Stuttgart.

Read some stories inspired by the meeting written by our 2015 delegates: 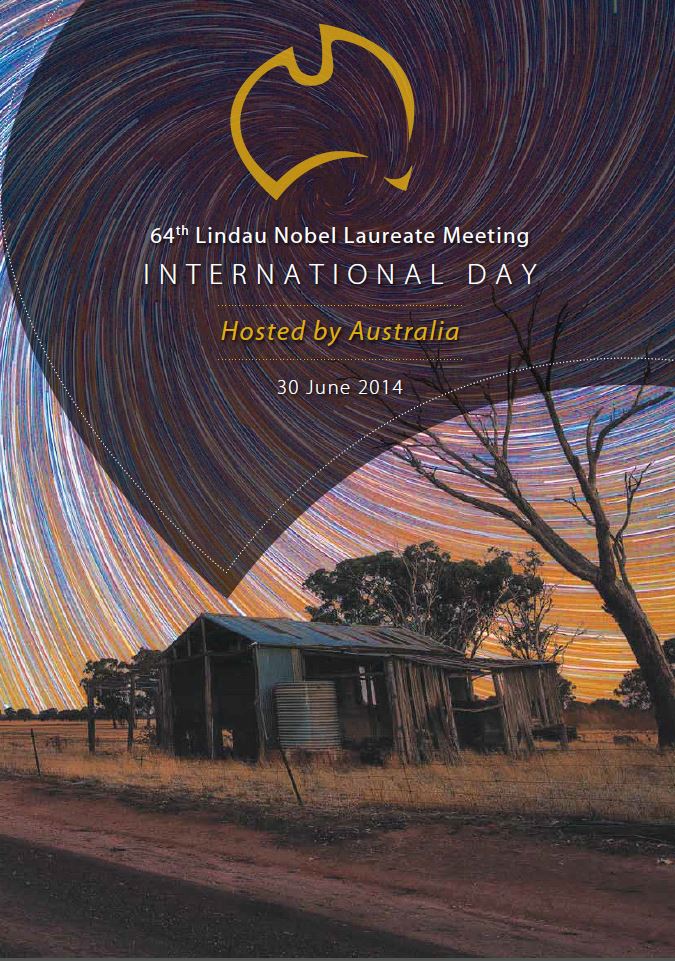 Australian science, innovation, technology, education, food and wine were on show during the 2014 Lindau Nobel Laureate Meeting as, for the first time, Australia hosted the International Day during the 2014 Meeting.

The meeting attracted local media interest from The Australian, the Sydney Morning Herald, the Border Mail and a number of other online outlets. Watch the ABC's Science Show segment on the meeting or participant Kirsty Short's interview with Nature.

The International Day began with a science breakfast that featured a panel discussion on women in science. The panellists included Professor Blackburn and Professor Schmidt, the Academy’s Immediate Past President Professor Suzanne Cory and the inaugural winner of the Academy’s Nancy Millis Medal for Women in Science, Professor Emma Johnston. Each shared their own experiences and views on the subject, with the panel being moderated by the Ambassador for Science and Mathematics at The University of Sydney, Adam Spencer.

Andrew Robb, Minister for Trade and Investment, welcomed everyone at the evening International Get Together. He was followed by a uniquely Australian musical performance by recorder virtuoso Genevieve Lacey and harpist Marshall McGuire, with Professor Johnston then explaining to the audience why she has the best job in the world—as a marine biologist in Australia.

Professor Schmidt, who is also a vigneron, made sure that top quality Australian wines—all made by Australian scientists—were on offer throughout the night.

Another of Australia’s Nobel Laureates, Professor Peter Doherty, was not able to attend but appeared in a short video during the evening program. A copy of Professor Doherty’s book, ‘The Beginner’s Guide to Winning the Nobel Prize’, was given to each of the 1,000 guests. Professor Marshall even grabbed a copy!

The International Day and the attendance of the young Australian scientists were made possible with the support and sponsorship of:

Important note regarding diversity of the Australian Lindau delegation
The Australian Academy of Science strives for gender equity in science and considers both scientific excellence and a range of diversity issues including gender balance in the selection of the SIEF-AAS Fellows. However, the final selection of attendees is at the discretion of the Lindau Nobel Laureates Meetings committee. To learn more about the Academy’s efforts to address gender equity in the STEMM sector, please visit The SAGE initiative. It should be noted that the Academy has an Equity and Diversity Reference Group.