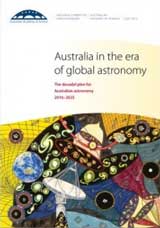 The plan is based on the reports of 11 working groups, comprising over 150 astronomers, engineers and educators from over 30 Australian institutions across all states and the ACT, in a process run by the Academy's National Committee for Astronomy during 2014 and 2015.

The document follows on from the success of the committee's 2006 plan, ‘New horizons: a decadal plan for Australian astronomy 2006–15’. This publication was highly influential in presenting the community's vision to stakeholders outside the research sector, including key stakeholder the Australian Government and industrial and research partners nationally and internationally.

The National Committee for Astronomy (NCA) aims to foster astronomy in Australia, to link the Academy to Australian astronomers and relevant scientific societies, and to serve as a link between Australian and overseas astronomers, primarily through the International Astronomical Union. The committee conducts a strategic planning process every 10 years, allowing Australian astronomy to carry out a stocktake of its capabilities, assess its impact both nationally and internationally, provide a vision for the future, and set priorities and develop strategies for implementing that vision. The committee proposes and encourages activities in Australia to enhance the status of astronomy, in collaboration with the Astronomical Society of Australia, Astronomy Australia Limited and other professional and regional societies. It also supports planning for Australian involvement in current and future large-scale astronomical facilities.