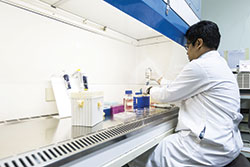 Benefits of vaccines outweigh the risks

Vaccines, like other medicines, can have side effects. However, all vaccines in use in Australia provide benefits that greatly outweigh their risks 1,4,5,7-10,12,13.

Most reactions from vaccination are minor

The great majority of side effects that follow vaccination are minor and short-lived. The most common side effects for all vaccine types are ‘local’ reactions at the injection site, such as redness or swelling, which occur within hours and are clearly caused by the vaccine. More general or ‘systemic’ reactions, such as fever or tiredness, can also occur after vaccination, but careful studies have shown that they are much less common than local reactions 73.

Local reactions are outward signs that the vaccine is interacting with the immune system to generate a protective response. The nature of these reactions varies, depending on the type of vaccine given.

For example, if a person develops a fever due to an inactivated vaccine, they almost always do so within 24 to 48 hours—the time when the immune system is making an immediate response to the components of the vaccine. In contrast, the onset of fever caused by a live attenuated vaccine, such as the MMR vaccine, is delayed for seven to 12 days because this is the time needed for the attenuated virus in the vaccine to multiply sufficiently to induce a protective response from the immune system 74,75.

Some adverse events coincide with, but are not caused by, vaccination

Symptoms such as fever, rashes, irritability and nasal snuffles are common, especially among children. Consequently, it can be difficult to determine how many of these reactions are caused by a vaccine when the ‘background rate’ (how often it occurs anyway) in the same age group is unknown.

Box 8: Does the MMR vaccine cause autism?

Medical conditions with unknown causes have been incorrectly linked to particular vaccines. The most prominent example is the claimed link between the MMR vaccine and autism—a disease whose first clinical signs commonly occur in the second year of life, at a time when MMR vaccine is usually given. The original suggestion that the MMR vaccine might be linked to autism was made in 1998, when a research group proposed that the attenuated (live) measles virus in the vaccine infected the intestine. The leader of the research group claimed this led to inflammation that resulted in lower absorption of nutrients needed for normal brain development, the outcome being developmental disorders such as autism.

Many comprehensive studies subsequently ruled out this suggested link by showing conclusively that rates of autism are the same among children who have and have not been vaccinated. Ultimately, the original report was shown to be fraudulent, and was retracted by the medical journal that published it.

Similarly, any link between thiomersal, which was previously used in minute quantities as a preservative in vaccines, and autism has also been excluded (see Question 2) 77.

One unique study from Finland addressed this issue 74. Researchers analysed common symptoms in 581 pairs of twins after one twin received the MMR vaccine and the other was given a dummy vaccine (a placebo). Between one and six days after the injection, the number of adverse events in the twin who received the MMR vaccine was almost identical to those in the twin who received placebo 74 (see Figure 4.1). Between seven and 12 days after the injection, the vaccinated group had a measurable increase in symptoms that are known to be associated with administration of the attenuated measles vaccine, such as fever, irritability and rash. On the other hand, no difference between the two groups could be detected over that period in the frequency of coughand cold-like symptoms—which occur commonly with or without vaccination. Moreover, even some of the symptoms known to occur after MMR vaccine were also seen in the group who received placebo, but at a lower rate.

In summary, this valuable study showed that many common symptoms that occur after a vaccine is given are not caused by the vaccine, but occur by chance at that time.

However, safety surveillance systems in countries like Australia require health care providers to report adverse events that occur following vaccination regardless of the cause. The reports are compared with historical trends to identify any changes that require special investigation and to assess whether adverse events are vaccine-related. For example, new vaccines are often reported more often than old vaccines, and reported events decrease as health carers gain familiarity with the vaccine. It can be misleading to rely on the reported raw numbers of adverse events, as a number of factors must be taken into account to determine if an event is coincidental or caused by the vaccine. The vast majority of adverse events are coincidental.

Box 9: Do vaccines cause autoimmune diseases?

Over the past 30 years, the number of people who develop autoimmune diseases has been increasing, particularly in societies where rates of infectious disease have declined 36. This has raised the question of whether vaccine use is contributing to the reported rise in certain autoimmune disorders. With the exception of the two rare diseases mentioned below, the answer is no (see also Box 3) 13. This conclusion is based on the stringent monitoring procedures put in place for detecting side effects of vaccination (see Question 5).

The first exception is the small increase in risk of developing the rare condition known as idiopathic thrombocytopenic purpura (ITP), which has been reported after the MMR vaccine. In this condition there is a short-term reduction in the number of small blood cells called platelets, which can lead to an increased risk of bleeding. However, the risk of developing this disorder associated with measles infection itself is more than 10 times greater than that associated with the vaccine 9 (see Figure 4.2). The other exception is Guillain–Barré syndrome (see Question 5)—but again, the risk of developing the disease after influenza vaccination is much lower than after the actual infection 12.

Box 10: Do vaccines cause allergic diseases?

Like autoimmune diseases (see Box 9), allergic diseases such as asthma have become more common in the developed world over the past 30 years. However, there is no significant evidence that vaccines cause allergic diseases in otherwise healthy people 78.

A more meaningful question to ask is whether vaccines can precipitate attacks of serious allergic reactions in susceptible children or adults. Overall, the rate of severe allergic reactions following vaccination is extremely low, between 0.02 and 4.52 per 100,000 doses 79 (see Figure 4.2). Nevertheless, precautions should always be taken by people with a past history of reaction to a specific vaccine or a strong family history of allergic disease. More information about vaccination of egg-allergic children was provided in Box 6 (Question 2).

Injectable vaccines used in Australia do not contain detectable amounts of antibiotics such as penicillin or sulphonamides to which some people may be allergic. The hepatitis B vaccine is grown in yeast. Although there have been some isolated reports of possible severe allergic reactions to this vaccine 59, supporting evidence is incomplete and the benefits of receiving the vaccine far outweigh the multiple risks associated with the infection.

Serious side effects from vaccines are extremely rare

Potentially serious side effects, such as transient febrile seizures, have been reported after vaccination. However, such severe side effects occur much less often with the vaccine than they would if a person caught the disease itself 1,8,10.

About three in every 10,000 children who receive the MMR vaccine develop a fever high enough to cause short-lived seizures. In contrast, the risk of such a fever is more than 30 times greater among children who develop the disease—affecting about 100 in 10,000 children 8, 10. Importantly, worldwide measles vaccination was estimated to prevent 9.6 million deaths from the infection during 2000 5. Similarly, around one in 10 young children develop a fever after receiving influenza vaccine 3, whereas around nine in 10 children develop a fever after a proven influenza infection 76.

he frequency of side effects associated with some earlier vaccine preparations (no longer in use in developed countries such as Australia) was higher than with the current generation of vaccines. Lastly, some alleged links between administration of certain vaccines and onset of diseases, particularly when the causes are unknown, have proven to be unfounded (see Boxes 8, 9 and 10).

Box 11: Is vaccination during pregnancy safe, and if so for what diseases?